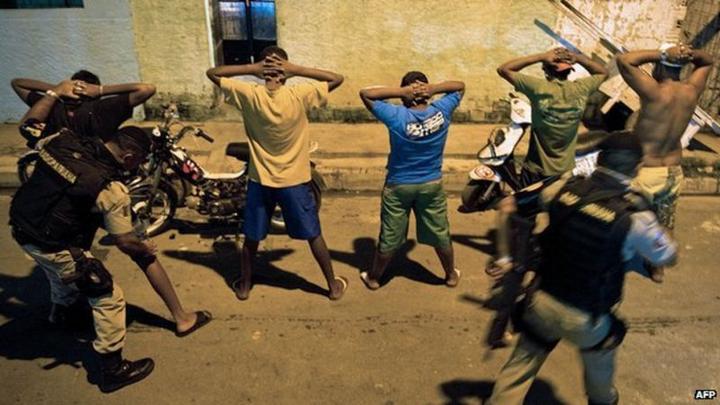 A mathematical formula could predict how many murders will occur as the population in Brazil increases, say scientists. The formula can also be applied to other factors such as unemployment and literacy, they claim. Brazil is known to have extremely high murder rates, which the team argue could now be better anticipated. The scientists say their work, published in journal Plos One, could one day help prevent crime. Gang and drug violence are among the factors accounting for many of Brazil's cities being classed as the most violent in the world.

Now a team has analysed data from Brazilian cities from the year 2000 and found that mathematical laws emerge when looking at how several factors - what they refer to as "urban metrics" - relate to each other. Criminologists are less convinced and say statistics and formulas are too far removed from the social issues that affect crime. Money problems "We have shown that most of the indicators that we use to characterise cities - such as GDP, the number of illiterate, the number of unemployed - are closely related with the population of the cities," said Haroldo Ribeiro, from the State University of Maringa, Brazil, one of the co-authors of the study. "Usually, the indicators increase with the population size, following a well-defined mathematical law."

He told BBC News that the same mathematical law can be applied to homicides as well as 11 other urban indicators, including cases of child labour. However, it was hard to predict the most likely indicator for crime, added Dr Ribeiro, although he found that factors relating to money - such as unemployment and family income - had more influence on the number of homicides, something already well established by criminologists. "While this work is not focused on preventing crime… I believe that unveiling relationships between crime and urban metrics can help to guide public policies towards more effective investments, and, consequently, to help prevent crime." Despite the problems Brazil is facing, Dr Ribeiro said his country was becoming better at tackling its crime problems. But he added that justice was very slow, which could keep spreading a "culture of impunity".

Police in Brazil frequently raid areas known to be high in crime such as its slums Criminologist David Wilson of Birmingham City University, UK, said that although murders "do tend to be concentrated in parts of cities with low levels of income", the idea that there was a mathematical formula related to population growth "entirely ignores" the emotional triggers - or "foreground factors" - that lead to crime. "Murder is usually about the loss of face; it's about young men in circumstances in which there's some kind of conflict that results in one of those young men wanting to extract revenge. "It's about the foreground factors much more than the background factors - which this study looks at. "This study doesn't capture the phenomenon of murder. It's such a complicated phenomenon based on emotion," Prof Wilson told BBC News. He added that statistical correlations could be found in many kinds of data "but that doesn't prove cause and effect". But Luis Bettencourt of the Santa Fe Institute, US, who works with data from cities to analyse human behaviour, said the formula could be applied to other cities too. "When you look at a city and want to characterise it in some way, the obvious one is population size. What's interesting about crime is that the levels of homicides tend to increase on a per capita basis, the larger the city. "The explanation is essentially that cities exist to promote social interaction. And crime is one such social interaction.

Read our article: Distance to the scaling law: a useful approach for unveiling relationships between crime and urban metrics