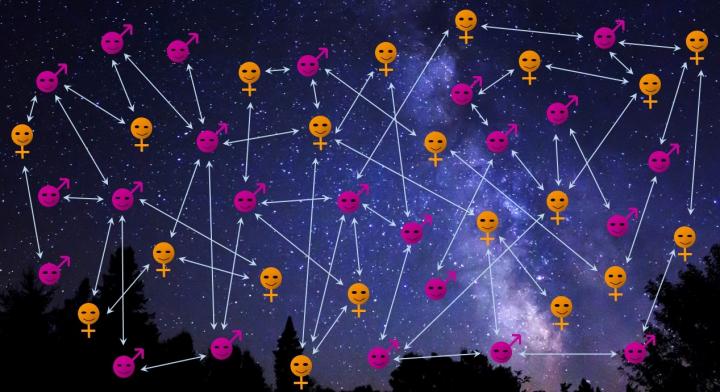 Succeeding in the male-dominated science, technology, engineering and mathematics (STEM) disciplines can be very challenging for female faculty. Now, a Northwestern University study of the collaboration patterns of STEM faculty publishing 4 November in the open-access journal PLOS Biology has found that the playing fields in some disciplines are not as level as they first appear. "Our findings in molecular biology, particularly genomics, are what surprised us the most," said Luís Amaral, a professor of chemical and biological engineering in the McCormick School of Engineering. "There is a lot of research money in this high-profile area, and women are not represented proportionally. This raises all sorts of questions as to what kind of cultural environment has been created in the field."

Knowing that collaboration is critical to the scientific enterprise, Amaral and Teresa K. Woodruff, a Northwestern Medicine reproductive biologist, focused on this factor in their study of the underrepresented group of female faculty in STEM. The data analysis of the complete publication records of nearly 4,000 faculty members in six STEM disciplines at top research universities across the USA produced a number of findings.

The researchers found that, broadly speaking, female faculty (for the six different disciplines in the study) have as many collaborators, or co-authors, as male faculty and that female faculty tend to return to the same collaborators a little less than males. Previous research by Amaral had shown that novel collaborations have a greater likelihood of producing work of higher impact.

However, those aggregate patterns have to be interpreted with care, Amaral cautioned, because the situation can change within subdisciplines. By digging deeper, the researchers found that females are underrepresented in large teams in genomics (a subdiscipline of molecular biology). This could be an indication of a negative cultural milieu in this particular subfield, the researchers said.

"We want to understand ways in which males and females live different experiences in STEM disciplines, so that a level playing field can be created where needed," Woodruff said.

"Much more progress needs to be made for underrepresented groups to feel welcomed in STEM disciplines," Amaral said. "In fact, the degree of progress is not even uniform within a single discipline, so one needs to make sure females are not being excluded from specific subdisciplines."

In an accompanying Primer, "Rosalind's Ghost: Biology, Collaboration, and the Female," also publishing 4 November, Caroline Wagner of Ohio State University, who was not involved in the study, sets this work in context. "One factor remains fairly constant: women are underrepresented in terms of authorships, including first and/or last authorships (whichever is more prestigious), coauthorships, and in the granting of scientific prizes," she writes.

"Overall, the more elite the scientist, the more likely they are to work at the international level; however, female collaborators are less likely to be working internationally and are more likely to collaborate locally. This means that they are also less likely to coauthor with top scholars." Wagner notes that previous studies and the new findings from Amaral's group serve to remind us that the legacy of Rosalind Franklin, whose crucial work on the structure of the DNA double helix over 60 years ago was notoriously underappreciated at the time, lives on.

Read the story at: http://phys.org/news/2016-11-female-faculty-underrepresented-genomics.html

Read our article: Differences in Collaboration Patterns across Discipline, Career Stage, and Gender