Anomalous diffusion and the adsorption-desorption process in anisotropic media 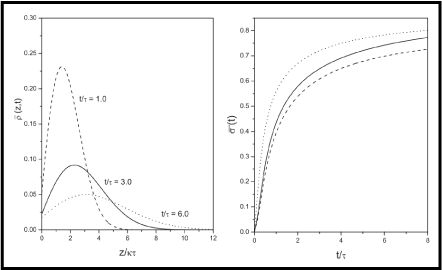 The diﬀusive process of dispersed particles in a semi-inﬁnite cell of an anisotropic ﬂuid limited by an adsorbing surface is theoretically investigated. The densities of bulk and surface particles are analytically determined, taking into account the conservation of the number of particles immersed in the sample. It is shown that an anomalous diﬀusion process can take place according to the time scale considered. For short time interval there is a sub-diﬀusion process, followed by a super-diﬀusive regime. For large time interval the diﬀusive process tends to a normal behavior. The analysis is suitable for the description of the adsorption phenomena of neutral as well as charged particles in anisotropic media.