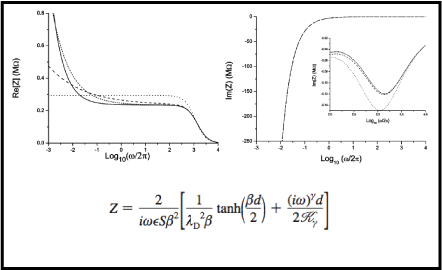 The inﬂuence of the ions on the electrochemical impedance of a cell is calculated in the framework of a complete model in which the fractional drift-diffusion problem is analytically solved. The resulting distribution of the electric ﬁeld inside the sample is determined by solving Poisson’s equation. The theoretical model to determine the electrical impedance we are proposing here is based on the fractional derivative of distributed order on the diffusion equation. We argue that this is the more convenient and physically signiﬁcant approach to account for the enormous variety of the diffusive regimes in a real cell. The frequency dependence of the real and imaginary parts of the impedance are shown to be very similar to the ones experimentally obtained in a large variety of electrolytic samples.