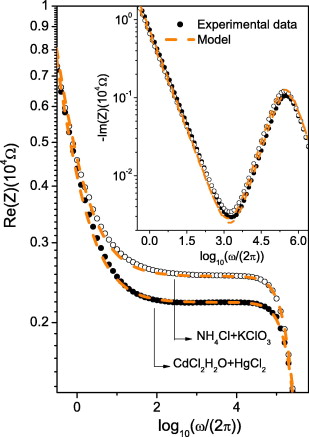 The electrical response of an electrolytic cell containing more than one group of ions is investigated under the fractional approach where integro – differential boundary conditions and fractional time derivative of distributed order are considered. The model derived here, which accounts for anomalous diffusion of charges in a dielectric media, is compared with experimental data for mixtures of two salts with same valence and water and a good agreement was found. We show that in the low frequency limit, the electrical response is essentially governed by the boundary conditions and suppress the formation of a second plateau predicted when surface effects are neglected, being therefore linked to an anomalous diffusive process which, in the usual circuit description, may be connected to constant phase elements. Our model may be important for the interpretation of ionic density measurements in liquid crystals and other electrolytic cells in a more realistic fashion.