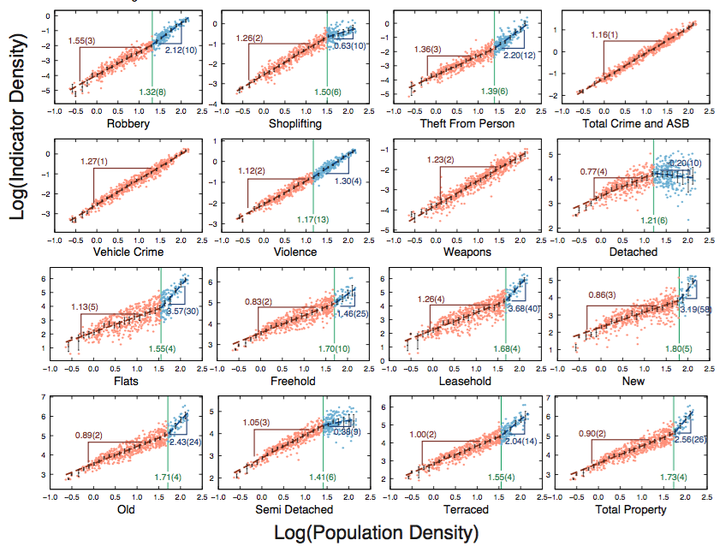 Urban population scaling of resource use, creativity metrics, and human behaviors has been widely studied. These studies have not looked in detail at the full range of human environments which represent a continuum from the most rural to heavily urban. We examined monthly police crime reports and property transaction values across all 573 Parliamentary Constituencies in England and Wales, finding that scaling models based on population density provided a far superior framework to traditional population scaling. We found four types of scaling: i) non-urban scaling in which a single power law explained the relationship between the metrics and population density from the most rural to heavily urban environments, ii) accelerated scaling in which high population density was associated with an increase in the power-law exponent, iii) inhibited scaling where the urban environment resulted in a reduction in the power-law exponent but remained positive, and iv) collapsed scaling where transition to the high density environment resulted in a negative scaling exponent. Urban scaling transitions, when observed, took place universally between 10 and 70 people per hectare. This study significantly refines our understanding of urban scaling, making clear that some of what has been previously ascribed to urban environments may simply be the high density portion of non-urban scaling. It also makes clear that some metrics undergo specific transitions in urban environments and these transitions can include negative scaling exponents indicative of collapse. This study gives promise of far more sophisticated scale adjusted metrics and indicates that studies of urban scaling represent a high density subsection of overall scaling relationships which continue into rural environments.