The advantage of playing home in NBA: microscopic, team-specific and evolving features 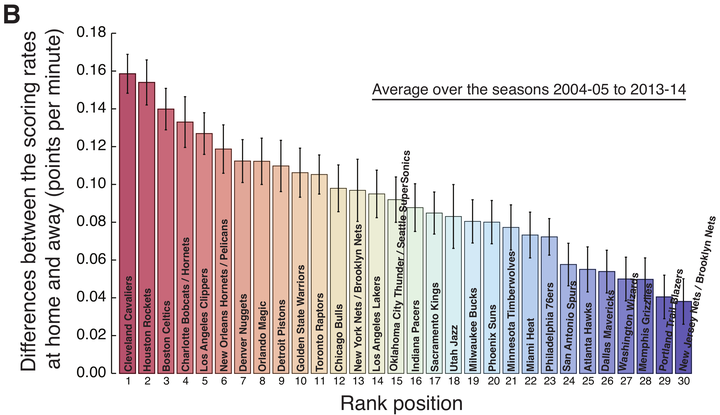 The idea that the success rate of a team increases when playing home is broadly accepted and documented for a wide variety of sports. Investigations on the so-called “home advantage phenomenon” date back to the 70’s and every since has attracted the attention of scholars and sport enthusiasts. These studies have been mainly focused on identifying the phenomenon and trying to correlate it with external factors such as crowd noise and referee bias. Much less is known about the effects of home advantage in the “microscopic” dynamics of the game (within the game) or possible team-specific and evolving features of this phenomenon. Here we present a detailed study of these previous features in the National Basketball Association (NBA). By analyzing play-by-play events of more than sixteen thousand games that span thirteen NBA seasons, we have found that home advantage affects the microscopic dynamics of the game by increasing the scoring rates and decreasing the time intervals between scores of teams playing home. We verified that these two features are different among the NBA teams, for instance, the scoring rate of the Cleveland Cavaliers team is increased ≈0.16 points per minute (on average the seasons 2004-05 to 2013-14) when playing home, whereas for the New Jersey Nets (now the Brooklyn Nets) this rate increases in only ≈0.04 points per minute. We further observed that these microscopic features have evolved over time in a non-trivial manner when analyzing the results team-by-team. However, after averaging over all teams some regularities emerge; in particular, we noticed that the average differences in the scoring rates and in the characteristic times (related to the time intervals between scores) have slightly decreased over time, suggesting a weakening of the phenomenon. This study thus adds evidence of the home advantage phenomenon and contributes to a deeper understanding of this effect over the course of games.