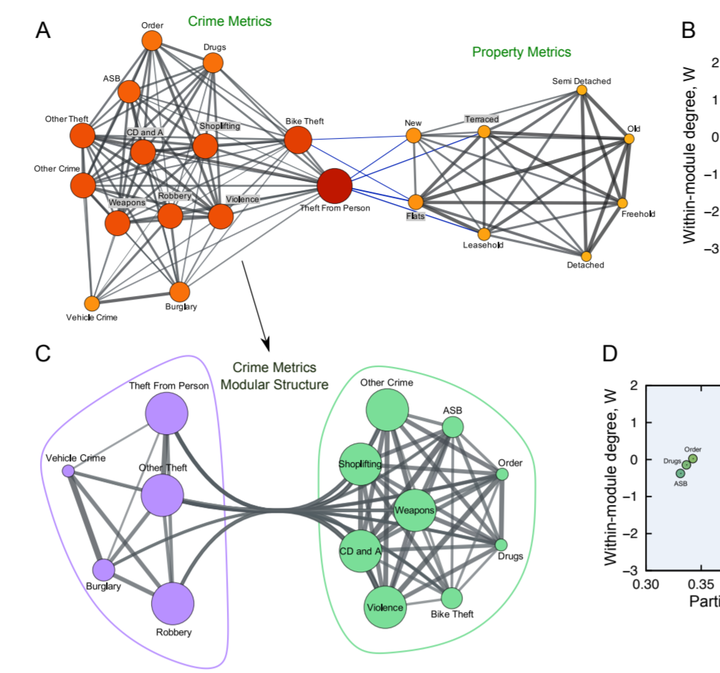 Scale-adjusted metrics (SAMs) are a significant achievement of the urban scaling hypothesis. SAMs remove the inherent biases of per capita measures computed in the absence of isometric allometries. However, this approach is limited to urban areas, while a large portion of the world’s population still lives outside cities and rural areas dominate land use worldwide. Here, we extend the concept of SAMs to population density scale-adjusted metrics (DSAMs) to reveal relationships among different types of crime and property metrics. Our approach allows all human environments to be considered, avoids problems in the definition of urban areas, and accounts for the heterogeneity of population distributions within urban regions. By combining DSAMs, cross-correlation, and complex network analysis, we find that crime and property types have intricate and hierarchically organized relationships leading to some striking conclusions. Drugs and burglary had uncorrelated DSAMs and, to the extent property transaction values are indicators of affluence, twelve out of fourteen crime metrics showed no evidence of specifically targeting affluence. Burglary and robbery were the most connected in our network analysis and the modular structures suggest an alternative to “zero-tolerance” policies by unveiling the crime and/or property types most likely to affect each other.