Dynamics of tournaments: the soccer case 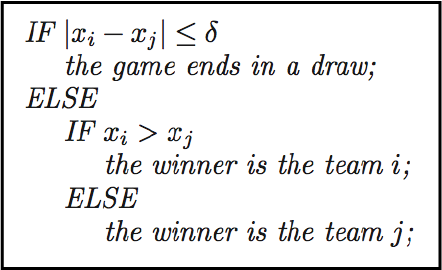 A random walk-like model is considered to discuss statistical aspects of tournaments. The model is applied to soccer leagues with emphasis on the scores. This competitive system was computationally simulated and the results are compared with empirical data from the English, the German and the Spanish leagues and showed a good agreement with them. The present approach enabled us to characterize a diffusion where the scores are not normally distributed, having a short and asymmetric tail extending towards more positive values. We argue that this non-Gaussian behavior is related with the difference between the teams and with the asymmetry of the scores system. In addition, we compared two tournament systems: the all-play-all and the elimination tournaments.