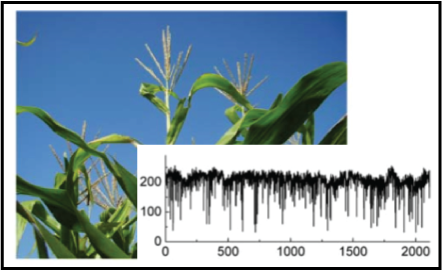 A wide range of physical and biological systems exhibit complex behaviours characterised by a scale-invariant structure of the fluctuations in their output signals. In the context of plant populations, scaling relationships are typically allometric. In this study, we analysed spatial variation in the size of maize plants (Zea Mays L.) grown in agricultural plots at constant densities and found evidence of scaling in the size fluctuations of plants. The findings indicate that the scaling of the probability distribution of spatial size fluctuation exhibits non-Gaussian behaviour compatible with a Levy stable process. The scaling relationships were observed for spatial scales spanning three orders of magnitude. These findings should provide additional information for the selection and development of empirically accurate models of pattern formation in plant populations.