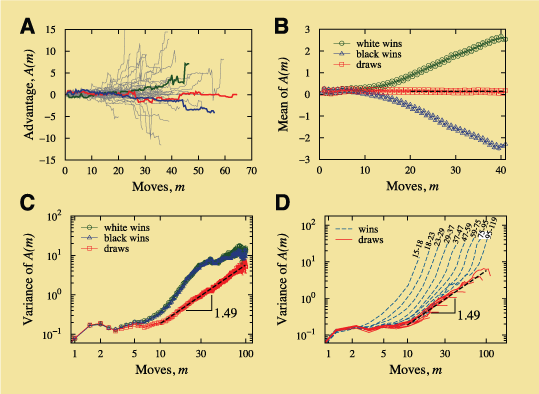 The complexity of chess matches has attracted broad interest since its invention. This complexity and the availability of large number of recorded matches make chess an ideal model systems for the study of population-level learning of a complex system. We systematically investigate the move-by-move dynamics of the white player’s advantage from over seventy thousand high level chess matches spanning over 150 years. We find that the average advantage of the white player is positive and that it has been increasing over time. Currently, the average advantage of the white player is ~0.17 pawns but it is exponentially approaching a value of 0.23 pawns with a characteristic time scale of 67 years. We also study the diffusion of the move dependence of the white player’s advantage and find that it is non-Gaussian, has long-ranged anti-correlations and that after an initial period with no diffusion it becomes super-diffusive. We find that the duration of the non-diffusive period, corresponding to the opening stage of a match, is increasing in length and exponentially approaching a value of 15.6 moves with a characteristic time scale of 130 years. We interpret these two trends as a resulting from learning of the features of the game. Additionally, we find that the exponent characterizing the super-diffusive regime is increasing toward a value of 1.9, close to the ballistic regime. We suggest that this trend is due to the increased broadening of the range of abilities of chess players participating in major tournaments.