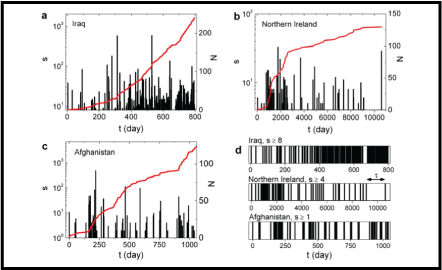 Understanding the mechanisms and processes underlying the dynamics of collective violence is of considerable current interest. Recent studies indicated the presence of robust patterns characterizing the size and timing of violent events in human conflicts. Since the size and timing of violent events arises as the result of a dynamical process, we explore the possibility of unifying these observations. By analyzing available catalogs on violent events in Iraq (2003–2005), Afghanistan (2008–2010) and Northern Ireland (1969–2001), we show that the inter-event time distributions (calculated for a range of minimum sizes) obeys approximately a simple scaling law which holds for more than three orders of magnitude. This robust pattern suggests a hierarchical organization in size and time providing a unified picture of the dynamics of violent conflicts.